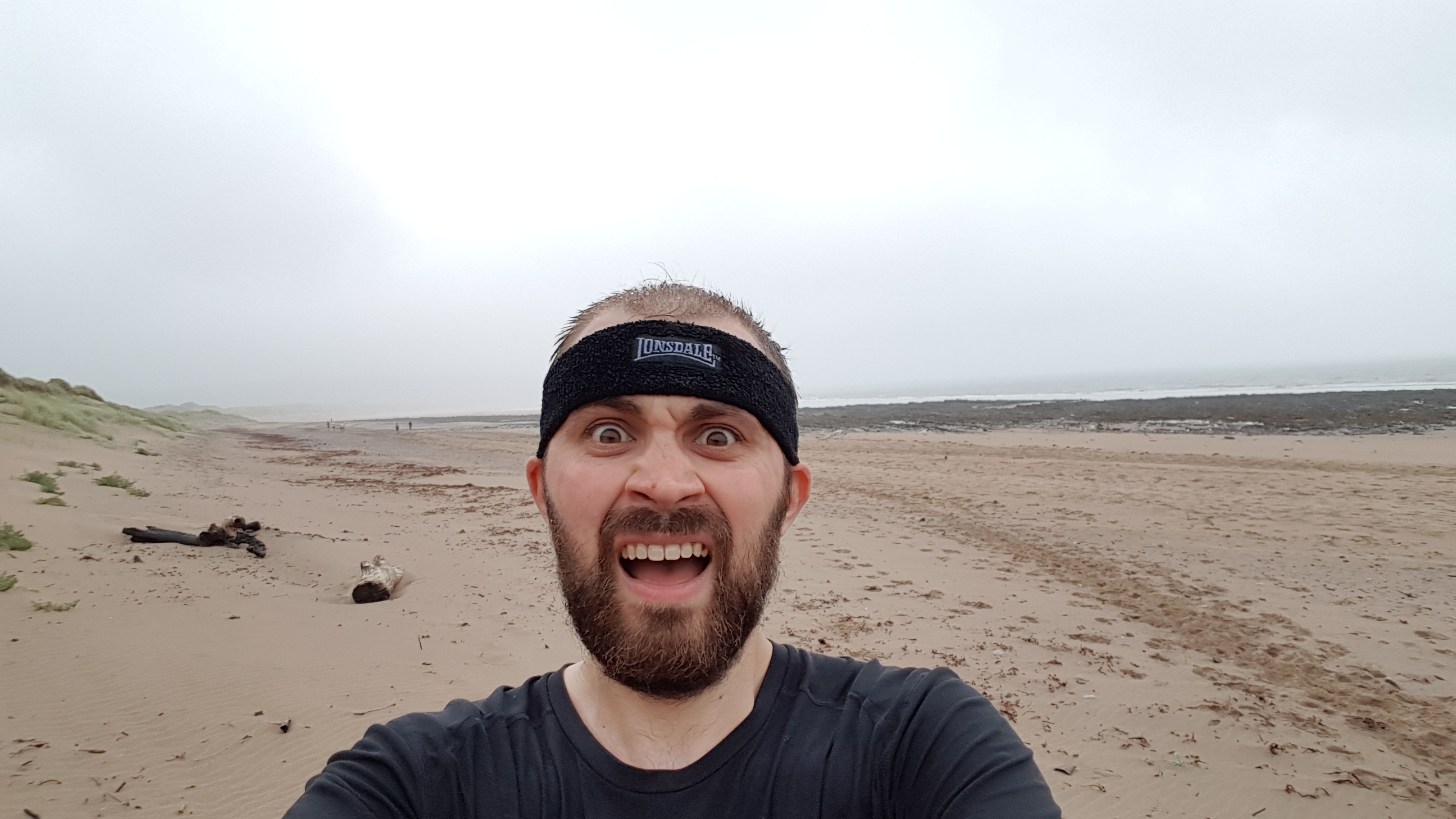 After last year’s Rabbit Run, most of those who ran it said they couldn’t wait for next year when they would definitely do the longer version of the race. 12 months on, and of those runners, it was just me lining up for the Giant Rabbit Run. Thanks guys.

Somehow, the weather was even worse than last year and my feet were soaked 45 minutes before the race had even started, and I had 3+ hours of mud to deal with, not to mention that river crossing.

Sam also signed up at the last minute, but I was reasonably sure he wouldn’t humour me by running at my pace for long!

This would be my longest run by a good 4 miles, so I decided to be positive and start on the front row right next to last year’s winner. This was fun for 100m or so, but another 100m on and 2/3rds of the pack (including Sam) had overtaken me! From then on for the first lap, it was Operation Run As Slowly As You Can. I had no idea if I could last for 18 miles, so I was determined not to blow everything out at the beginning.

This race really has everything, mud, gravel, sand (more on this later), some more mud and excrement from an interesting variety of animals. One of the best bits of the race is running down the largest sand dune in Europe, without any of the hassle of having to run up it in the first place. I grinned like an idiot all the way down and seemed to get down it in about half a dozen strides, followed by a short walk to try to get my heart rate back down! I then settled into a pretty consistent slow manageable pace for the rest of the first lap.

My original plan had been to get to the start/finish line for the start of the shorter version, but despite getting there in time, things were running late and they weren’t ready to go. I did try to stop for a chat, but got run into by some guys who I had no idea were behind me!

There’s a long hill after the start line, and it was only here that my legs started to protest, and I wasn’t even halfway in yet. A few miles later the front-runners started streaming past me, and the bulk of the pack caught me up in the infamous quarter-mile of mud in the woods. As they all shot past me, fresh legged and enthusiastic, I felt like shouting at everyone “This is my second time doing this! That’s why I’m slow! You don’t know what real pain is!” but I managed to resist the urge (mostly).

It was then time for the split to do the extra part of the course, so some other Giant runners and me quickly chugged some energy drinks and set off through a fantastic winding, mercifully downhill, path through the woods. A marshal offered me a sherbet lemon (ideal for choking on during a trail run) which I of course accepted. Upon reaching the next marshal I said the last one had sweets, what had he to offer? He laughed and said nothing but free hugs, so I turned around, ran up the bank he was standing on to accept my hug.

This cheer was short lived as it was time for sand. So much sand.

The sand was wet and every footstep sank down two inches. Walking used the same amount of effort, it was just slower. All I could do was look straight down and run in the footprints that matched my stride. Once off the beach, it just got worse running through the dunes, where the sand was drier. I also dropped the wrapper from my snack bar, which kept getting blown out of my reach, cartoon style,every time I tried to pick it up. In total this section was 4km, but took me over half an hour.

I did a double fist pump getting off the sand, only to be told I had 5 miles to go. Again, time to grit my teeth and get on with it. Luckily from here it was pretty flat, and I had started overtaking some of the back markers of the Rabbit Run, so it was nice to see people and exchange a few words as I passed.

After sharing a few polite, friendly words of abuse with a few clubmates it was time for the best bit of the race, the river! A guide rope was added after last year, and as it turns out it was a little deeper than before too. I declined the guide rope, as well as patience, and just ran through the river overtaking a couple of people gingerly picking their way through. My lovely thick padded trail socks soaked up a good few litres of water too, which made the last mile heavier than expected.

I actually managed to finish decently, with encouragement from the rest of CDF, which was a nice surprise (They all booed when I crossed the first lap!)

Well there we go, my longest run, in the pissing rain, off-road, and through a river. I actually really enjoyed it and would definitely consider it again, despite the state of my toes and nipples. It was around 3h17m, but honestly, I don’t really care, which is the best thing about this kind of trail running, it just doesn’t matter.