How hard could it be?

‘Quite’ hard sums it up nicely.

First up was the Saturday 9am run at Pontypridd where we helped towards another of the largest ever attendances. Optimism was high and Tom brashly set out to finish in third just outside his PB. Diane and Bernie also ran PBs, perhaps forgetting about the other 28 MILES they would have to run over the next two days. Then it rained. 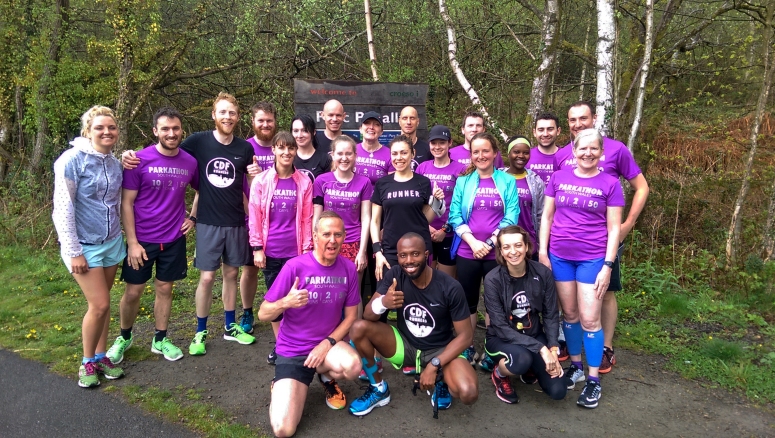 The heavy rain stopped on the journey to this course, and the humidity kicked in hard. The day started warming up and those wearing jackets quickly regretted it. We also learnt early on not to trust Mike with his directions after he went the wrong way, and then shouted at everyone else to “help” them go the right way. We also learnt not to clap small dogs through the finish line as they get scared and have to be carried by their owners instead!

Halfway there for the first day! When the distraction of the very cute goslings had passed, we wandered over to the other side of the lake to start. However, Bryn Bach has recently changed the direction of its run which moved the start line. We knew about the new direction, but not the new start! This meant reaching the finish line and then running another 200m to complete a full 5k. The runners were as impressed with that as you can imagine… This was also the spot for lunch, which varied from fruit and nuts, to sandwiches, to chips, beans and a pasty. Nice.

This run was prefaced with a 10 minute explanation of the course from Mike, which, predictably, went wrong at the first corner as Tom and Ryan decided to go a different way. We made our way around (just) but congratulations to Lily who managed to throw up three times in one run, which may be a ‘throw and go’ record for a 5k.

Final run of the day was in the beautiful grounds of Tredegar House which was hosting a folk dancing festival! Unfortunately this meant walking past delicious smelling coffee and burger vans on the way to the start. Following another lengthy, overly detailed description of the course, we set off creaking and aching through the park. The addition of sand to a few hundred metres of the course is understandable due to the sheer numbers of runners Newport parkrun gets, but completely unwelcome to 17 pairs of tired legs.

At the end, we collapsed into a heap and waited for Kolade who had got himself lost. Some half-hearted stretching occurred, but we were more interested in getting back to the cars to sit around and eat the copious amounts of food that had been brought along. This didn’t last long as we were hit by another hard shower so we bolted for home instead!

The start of day 2, and as it turns out, one of the hardest runs due to the tired legs that took some time to warm back up. We were joined by Laura’s dog Jet whose unique diagonal running style gave us something to smile about. Great to see some new faces join us that couldn’t make Saturday too.

To baking Barrybados next and after dashing to the toilets, a solid feature of every run as it turned out, and a little bit of playing on the climbing wall we set off determined not to be broken by ‘Heartbreak Hill’. While it didn’t break any hearts, it probably strained a few calves. Luckily, we had Mik on hand who had met us at Grangemoor on his bike and then cycled to Barry Island to offer more support. Our applause for every finisher echoed around the covered promenade, confusing a number of passers-by who were trying to enjoy the sun. 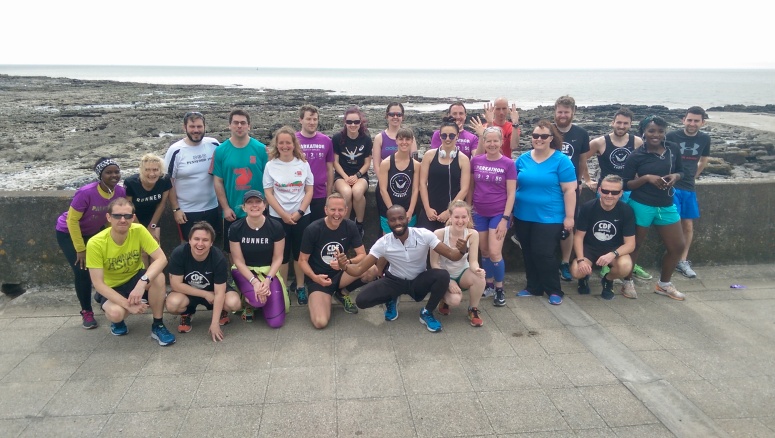 Next to a windy Porthcawl where it felt like we walked an extra parkrun to get to the start line! Porthcawl always feels like a long parkrun with its sweeping bends along the coast and long gentle slopes, and after 35k felt even longer.

This was our lunch stop, and instead of bringing sandwiches like yesterday, most runners decided to go to a local cafe and order sandwiches and drinks, which of course set us back by about an hour from the much slaved over schedule. Props to Adam for shunning simple, safe food and going for ham, egg and chips instead. We were all looking forward to seeing it again on the pavement at the next run…

Gnoll was a late addition to the aforementioned schedule, after Mike went there and decided what we needed was an extra 40 miles to drive and yet another 5k. Worryingly, cars were queueing at the gate when we arrived and upon offering £2 for parking, we waved through by the youthful attendants. Finally, some fame and recognition from the public! Even better was meeting up with Gnoll Run Director Graham, who explained the complicated course and even ran on ahead to direct us at the woods. There was also a huge children’s fair taking place, which made the park sections extremely difficult to navigate! I’m pretty sure we managed it without flattening any toddlers.

(Ham, egg and chips thankfully stayed were they were supposed to)

We finished at Cardiff, not only because it’s the granddaddy of Welsh parkruns, but mainly because it’s pancake flat! It was great to meet up with a few extra runners who managed to make it down to run with us as part of their normal Sunday long run. The course is very familiar to everyone, so we were spared the usual rambling description and set off. Some of us even got followed by a police van around the playing fields in what appeared to be the slowest chase in South Wales Police history. Waiting for us at the end was recent C25K graduate Liz with her amazing cakes, followed by a bit of a stretch led by Dan.

Obviously, we then went and had a massive KFC to celebrate. We’re pretty big on proper running nutrition.

Congratulations to everyone whether they ran or walked a single run, up to the 12 members of the 50k club. There were lots questions about whether this would be an annual event, to which the answer was usually a resounding NO, but ask us again in a few weeks, and perhaps we’ll think about it…