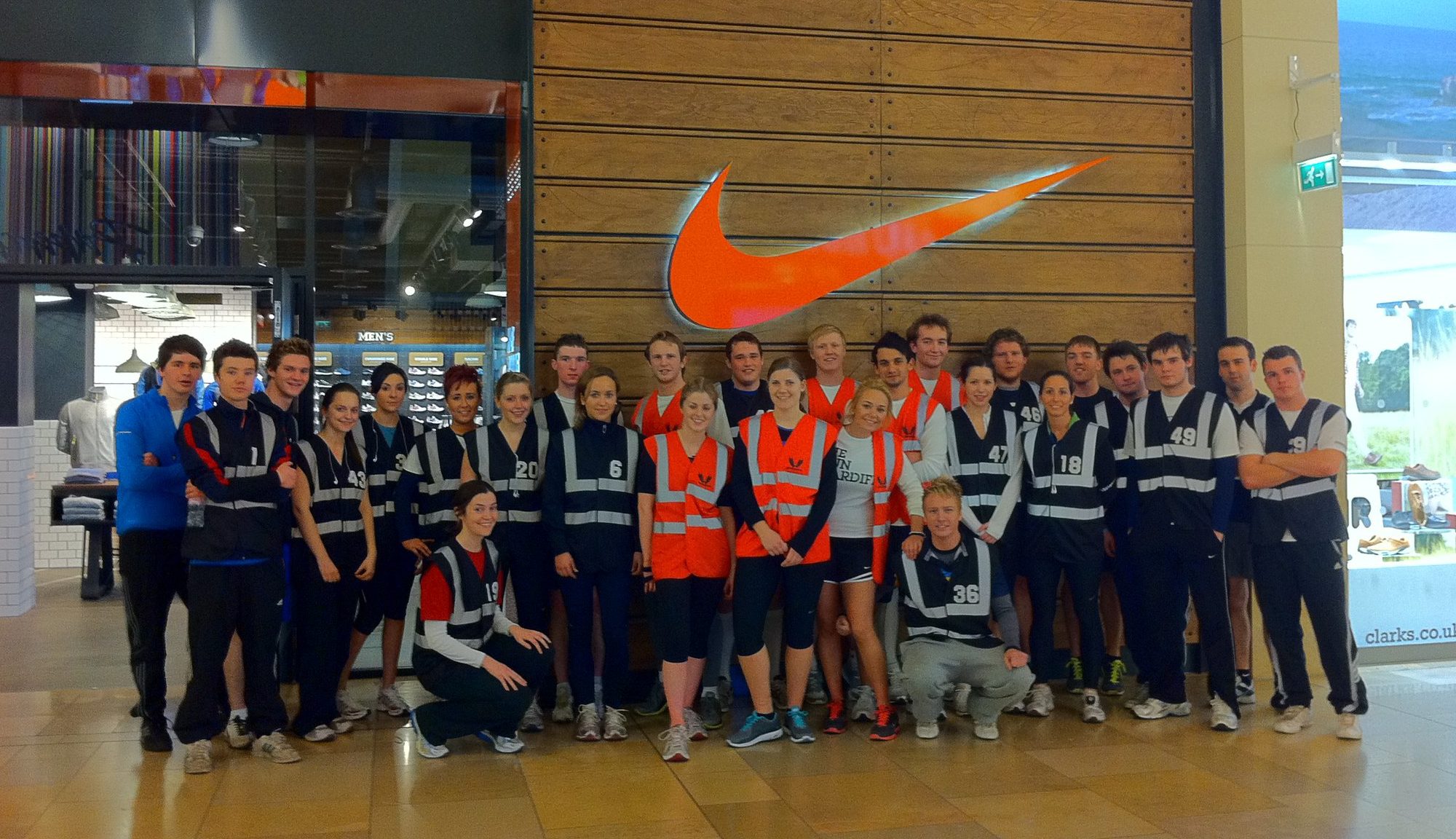 ‘CDF Runners’ is three years old today, or at least the name ‘CDF Runners’ is. The eagle eyed amongst you will have spotted the ‘Estd. 2010’ on our logo that hints at life pre-CDF.

We’ve had so many new members and developments recently, perhaps it’s time for a history lesson? Well, gather around and i’ll tell you a tale…

Long before ‘CDF Runners’ was a twinkle in the eye of a Nike marketing executive (we’ll get to that later) ‘Nike+ Run Club Cardiff’ was established in 2010 by the Nike shop in St David’s 2.

There were Nike Run Clubs in cities all around the world, and various members have visited them in places such as Lisbon, Athens and Miami!

Despite their elite status and training, it was these Nike staff who gave us our ethos of being super inclusive, supportive and noisy whilst encouraging runners to push themselves.

We’ve also retained the basic structure of running on Mondays and Wednesdays, though Mondays used to be women-only. This changed in mid-2012 and both sessions became mixed with the Monday ‘Recovery Run’ and Wednesday speed sessions we still do today.

The group was relatively small for a few years, without much mass involvement in races and parkrun until 2014 when the club entered it’s first team race, the Cosmeston Relays. 5 teams of 3 entered in brightly coloured Nike t-shirts and a questionable Power Rangers team naming convention.

Cosmeston has become a rock solid fixture for the club ever since, peaking at 22 teams in 2018!

Numbers had started to pick up in 2014, and by 2015 the club had grown significantly. There was more and more interest in races, and we started to become much more organised in terms of travelling together and supporting each other. When a large number were talked into entering the 2015 Manchester Marathon, the Sunday long runs were established. Many runners did their first ever marathon that year, having signed up within weeks of their first session!

It seemed Nike+ Run Club Cardiff was on an unstoppable rise, but in early 2016 we were told that Nike had had a change of policy and the clubs in Cardiff, Liverpool and Glasgow would have new names and branding separate from each other. We were told we would still have the backing of Nike, along with the free coaching and hosting but only the London shop would have the Nike+ Run Club name from now on.

Three new names were conjured up by Nike and were given to us to vote on. To be honest most of us we were a little underwhelmed by the choices, but ‘CDF Runners’ was chosen over ‘CF10 Runners’ and ‘Cardiff Run Crew’ and we learned to love it in time, and now couldn’t imagine being anything else. One of our runners designed the new logo, which coordinated with the new Dockside Runners in Liverpool and GLA Run Club in Glasgow.

The first big event for our new name was the Cardiff World Half Marathon Championships, and we gathered together a good number of CDF Runners along with representatives form our ‘sister’ clubs from Liverpool and Glasgow.

It was at this time we created a website and twitter account, and they’ve been a huge success in expressing our personality and attracting new runners.

It didn’t come as a huge surprise when just over a year later we were told the Nike shop would be shut down and the club would have to relocate or close down. Faced with this choice, we did what we always do when we have decisions to make, we went to Wetherspoons.

After a session, more than 30 people packed around a few tables and held a meeting to decide what we do next. There was a unanimous decision to continue as a club and to take on the coaching and all the background admin ourselves. A group of volunteers were chosen to take over from the Nike staff to moderate the Facebook group, which was where most of what we did was planned and discussed.

The word that Nike was closing had spread fast, and we quickly received an offer from Moti in Queen’s Arcade, which ticked all of our boxes. After our final run with Nike, we transitioned smoothly to Moti in June 2017 without missing a session.

At this time we discussed but resisted the idea of affiliation to Welsh Athletics, as we wanted to keep everything simple and most importantly free. We continued in this way for a little over a year before it was suggested again, but this time with the caveat that we could maintain free training sessions for everyone and offer membership for those that wanted it.

The club remains at it’s core a social running group, but has grown to become so much more besides.

We’ve run Couch to 5k and helped brand new runners take their first steps, which is one of the most rewarding things we’ve done. We’ve inspired people to run their first 5ks, 10ks, half marathons, marathons, and ultras. We’ve taught people to swim and cycle and taken part in aquathlons, duathlons and triathlons. We’ve travelled together around Europe to race and holiday together. We’ve taken part in Pride Cymru with our special Pride logos which are now a permanent option for anyone buying a new t-shirt. We’ve helped raise over £3,500 for homelessness charity The Wallich. We’ve helped to create new and lasting friendships. We’ve become more than a running club.

Thank you all for being part of the journey, and perhaps you now know a little more about who we are and where we come from!