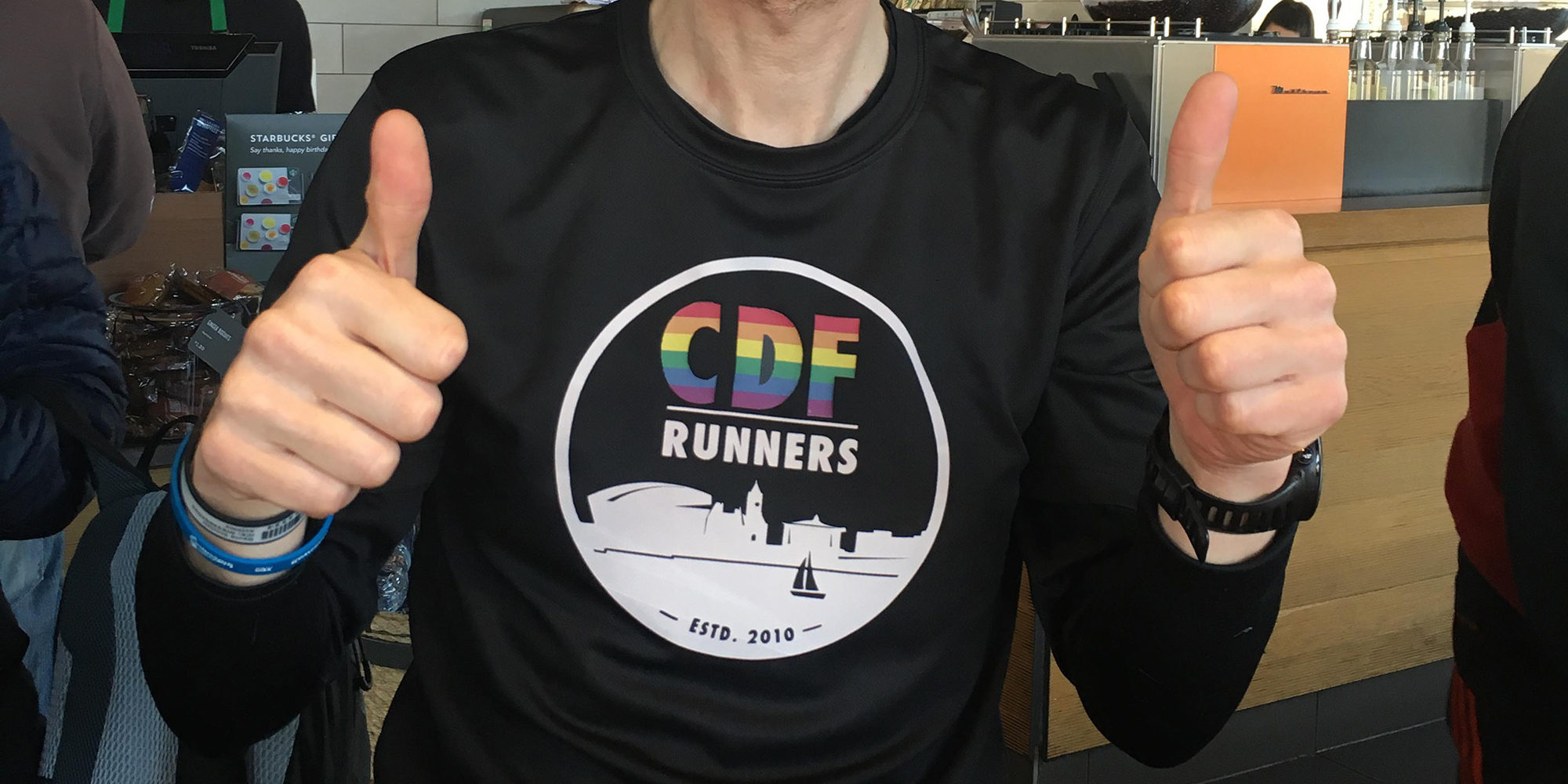 CDF Runners is an LGBT+ friendly club! That means we don’t tolerate any kind of homophobic, biphobic or transphobic abuse, and we do our best to be supportive and inclusive to everyone so that people feel welcome and can be themselves. David tells us about his experience of running and why it means so much to him. END_OF_DOCUMENT_TOKEN_TO_BE_REPLACED

This is a monthly opportunity to get to know some of our runners a little better, and first up is Dan, who is often the first to welcome and introduce himself to new runners.

My name’s Dan, I make music (under the name Flameholder) and I’m a part of CDF Runners.

I’ve always had an excitement for watching athletics on television and it’s kinda weird I never had the idea to start running myself until I was in my late 30s. I was in the shower one day, in the middle of depression over my ex-girlfriend, I saw my stomach was the biggest it had ever been and I said to myself: “NOPE, you’re gonna start running.”

So I went out with my old games teacher’s words stuck in my head – “If you want to enjoy running, run at a speed that is too slow for you.” I started running with the rules that I’d run too slow and stop whenever I wanted to. That run/walk approach worked and in the end I stopped wanting to stop. I only ran casually but as with anything that calls you in life I didn’t like the idea of letting it go so when my friend Anton told me Nike had a free running club I wanted to get into it properly.

We went to the local store and met the Team GB 3K steeplechaser Ieuan Thomas, who started the club with UK Athletics coach Fran Baker. The club later became CDF Runners and now it operates from Moti in Queens Arcade, Cardiff.

It was fun. Really fun. Upbeat.

I think I came in at the time when the club really started to grow to be more of a family and I’ve loved it since. The energy of it is social rather than being how fast you can run. So many people come through it and everyone’s different but everyone gets on. I’m like, allergic, to traditional downbeat British self-deprecating behaviour and there’s something about running that successfully cuts through that, it forces positivity into people.

I’m doing it on a diet of plant food and I find it fuels me amazingly. I’m consumed with fascination, I have to know how fast I can go. It’s cool when you start running how you learn from experience what kind of running suits you. I’ve joked that I’m just a frustrated sprinter before but I don’t really want things to be over in 15 seconds, I want something I can get into and I’ve found I like running everything from 400 metres to 10K for a long run; I’ve realised speed endurance is exciting to me. I do like doing Cardiff Half Marathon once a year though because it’s such a great event but I have a passion that I’d like to see more adults doing shorter distance running. More power to anyone who wants to do a marathon, it’s amazing strength that I don’t have but I think most people’s tendencies towards longer distance is purely traditional.

Most of the buzz for me is just training like an athlete is so cool. We obviously don’t train the same as elite athletes but we do proper sessions that they would do and I’ve come to think that doing activities with other people is really satisfying because you know every one of you is getting something out of it. I love seeing the way people will give a lot of time and passion (sometimes all of themselves) to something that’s not for money.

I think if you’re not using yourself physically, mentally and spiritually you won’t feel alive, running takes care of the physical but also reaches the other parts of that triangle. And what’s really at the heart of why we do it? I don’t know, follow your bliss.

Big respect to all our coaches past and present, especially Jon Harrhy. You are run club.

Want to be Runner of the Month? Of course you do. Doesn’t matter if you started running last week or last century, we want to know all about you.

Email cdfrunners@gmail.com or let us know in the Facebook group. 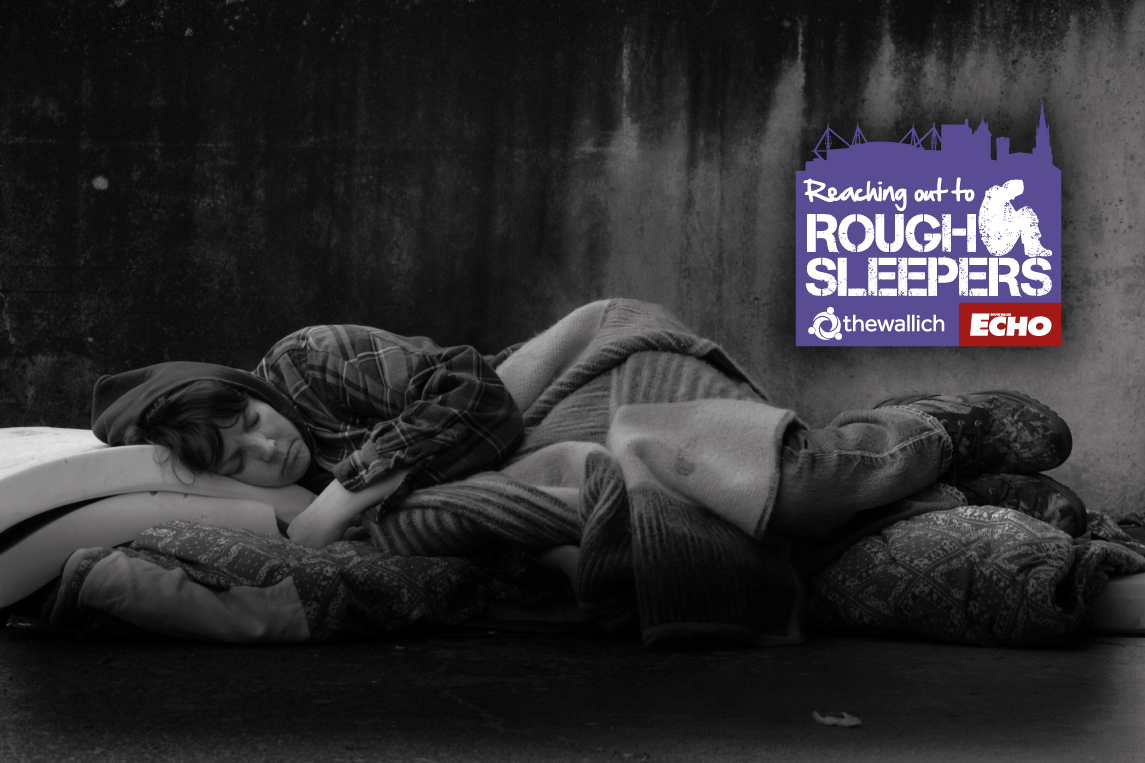 CDF Runners are adopting The Wallich as it’s first ever charity partner.

As a running club based in the centre of Cardiff, we cannot fail to notice the shocking rise in rough sleeping on our streets. With Winter drawing in, and Christmas around the corner, we decided we should try and help out.

We reached out to The Wallich, a charity working with those experiencing homelessness across Wales, and we’ve agreed to help fundraise and raise awareness of homelessness and rough sleeping in Cardiff, signposting our members to where they can find out more.

Homelessness is a hugely complicated issue, and an individual case is very rarely down to a single cause. The Wallich specialise in providing services for people with multiple, complex needs; people who, because of their high support needs, are often excluded from other services and have difficulty in accessing accommodation. The range of services The Wallich offers is as diverse as the client group they work with and the underlying aim is to ensure all people have access to support appropriate to their needs. Long term solutions, rather than short term fixes, are developed in partnership with the client.

We have decided that this partnership will last around 6 months, at which point we will evaluate the experience and look at supporting new charities on a regular basis.

You can donate to our Team Page here: https://www.justgiving.com/teams/cdfrunners

There will be a number of events and opportunities to learn more about The Wallich, which will be promoted here and on our Facebook page.

If you would like to know more or get involved please email cdfrunners@gmail.com. 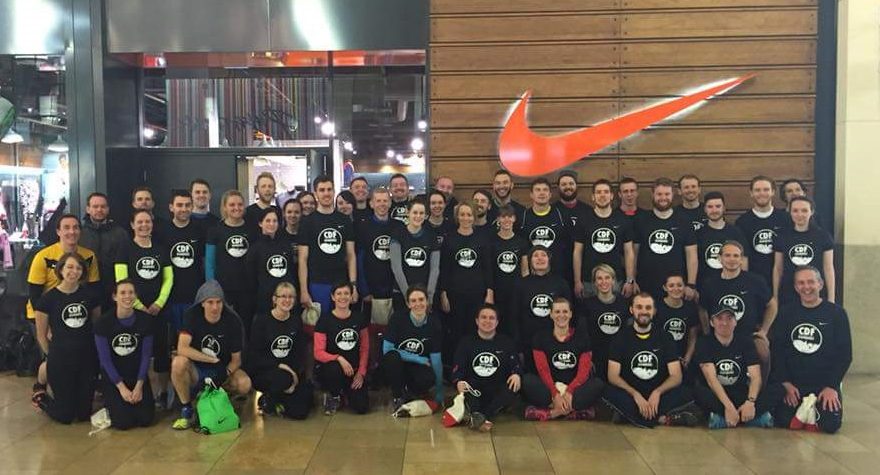 From June 1st 2017, CDF Runners will end its long association with Nike and begin a new chapter with independent local chain Moti. END_OF_DOCUMENT_TOKEN_TO_BE_REPLACED 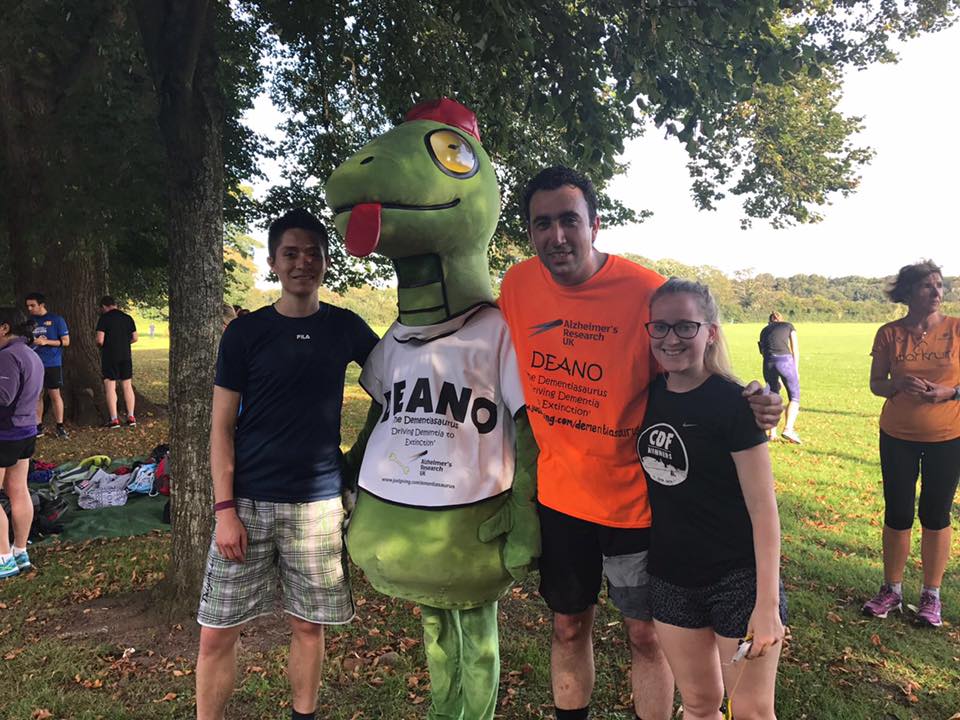 Honorary CDF Runner Deano the Dementiasaurus had a productive but exhausting time this weekend preparing for the Cardiff Half Marathon. On Saturday morning he ran 25:45 at Cardiff parkrun and then on Sunday morning Deano enjoyed volunteering at Cardiff Junior parkrun. However, a close encounter with some ‘over-enthusiastic children’ left Deano’s tail in need of major surgery.

Afterwards, Deano joined C25K graduate Maryam for a (almost) 17km training run – the furthest either of them had ever run! He was humbled by the constant support of the wonderful Cardiff public on every path and street they ran.

This exhausting weekend will all be worthwhile if it enables Deano to conquer the Cardiff Half next weekend and help the work of Alzheimer’s Research UK. You can support his efforts by visiting www.justgiving.com/dementiasaurus

Dementia is a collective name for progressive degenerative brain syndromes which affect memory, thinking, behaviour, communication and emotion. Although each person will experience dementia in their own way, eventually those affected are unable to care for themselves and need help with all aspects of daily life. This can transform the lives, not only of the dementia sufferer, but also of their family and friends who care for them, in frightening and unpredictable ways.

Dementia is one of the fastest growing illnesses around the world. Worldwide, 47.5 million people have dementia and there are 7.7 million new cases every year. There are 850,000 people with dementia in the UK, with numbers set to rise to over 1 million by 2025. At current rates, this will soar to 2 million by 2051.

Although dementia mainly affects older people, it is not a normal or
inevitable part of ageing. However, despite various ways to prevent its onset, medicines to slow its progression and treat its symptoms, and support to manage living with the disease, there is currently no known cure for most types of dementia.

Donations are essential for Alzheimer’s Research UK to fund their work, with world-class advisory panels ensuring that funding decisions are taken in a rigorous and effective manner. 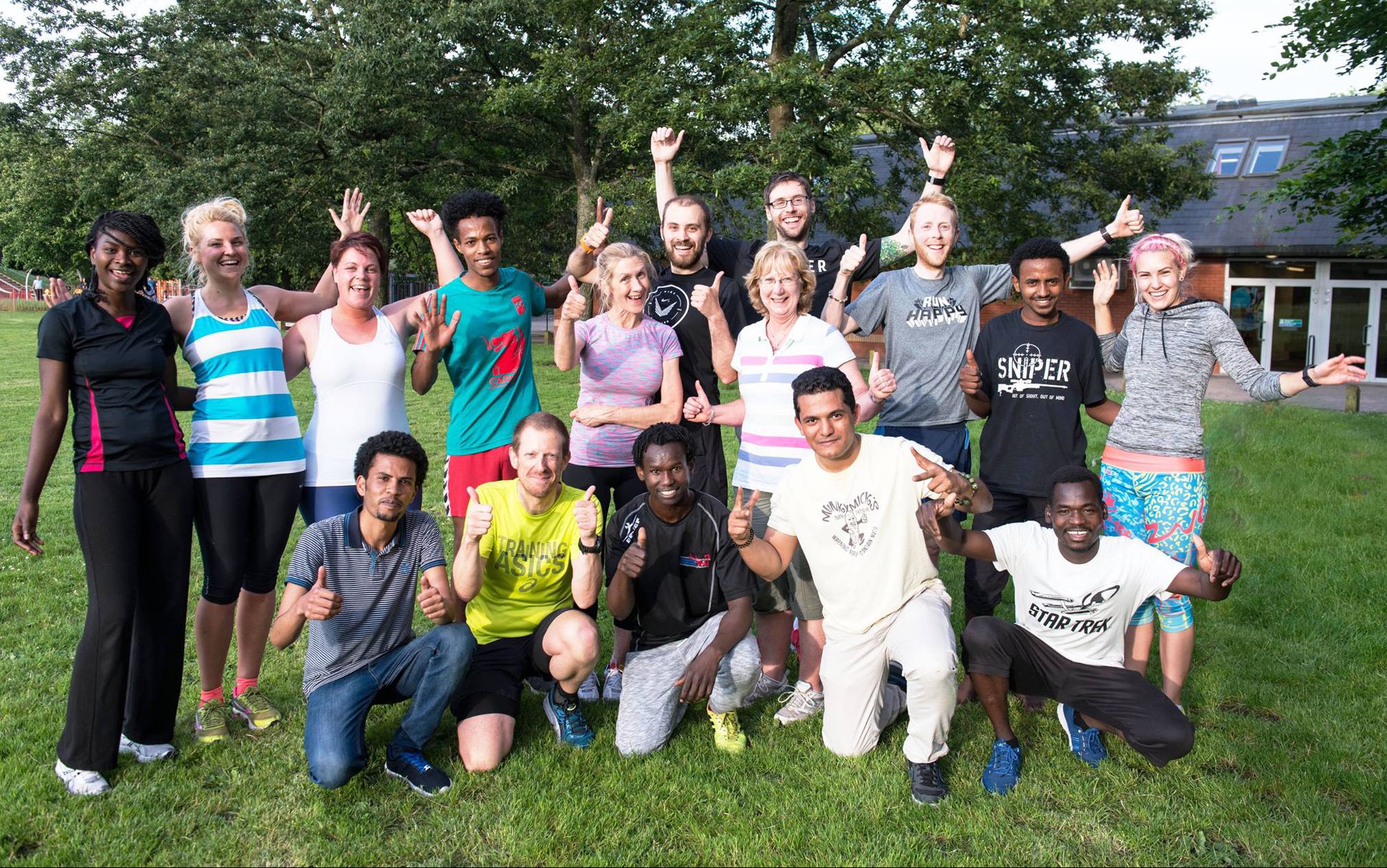 Hi everyone, you may have seen recently how we’ve been supporting a new running group aimed specifically at Asylum Seekers and Refugees, and so I wanted to explain what’s going on.

My name is Stewart and I work for local charity Diverse Cymru, and I’ve been speaking to colleagues at Oasis Cardiff and Space4u to get this project up and running.

Oasis Cardiff and Space4u do fantastic work with asylum seekers and refugees to make them feel welcome in the community and provide vital services that would not otherwise be available. Diverse Cymru run a unique mental health support programme which deals with the particular issues faced by asylum seekers.

To briefly explain their situation, when someone is persecuted to the point where their life is in danger, they are forced to flee their country, often leaving their family and entire way of life behind them. Some come to the UK, because of historic links, language skills or simply because they jump on a boat or truck and this is where they end up. Once they have arrived a made a formal claim for asylum, they are an asylum seeker. Once this has happened the Home Office will send this person to a ‘dispersal area’, such as Cardiff, to wait for their claim. This can take years and years to complete, with the asylum seeker not allowed to work or claim benefits in that time. When (if) their claim is finally accepted, they become a refugee.

A colleague and I had an idea to create a running group for the benefits that us runners already know all about and, luckily, I mentioned it to Oasis who had been planning exactly the same idea and we decided to work together! I then used my link with CDF Runners to help support the group, provide some expertise and volunteers to get it off the ground.

The response has been brilliant, and we’ve had lots of volunteers come forward to help facilitate some simple weekly running sessions. Starting in the middle of Ramadan might not have been the most ideal time to start, but the first session coincided with Refugee Week and we thought it would be best to just get going and start building momentum.

We’ve also collected loads of running shoes and clothes, which has been a huge help, and has enabled many people to start to run or to pick up the habit again after many years. I’ve also been in contact with other local running clubs who have also pledged donations, which is a great demonstration of the running community coming together.

If you would like to support this group with donations, we’ll always be looking out for running shoes and clothes, as well as opportunities of free race entries, please get in touch at cdfrunners@gmail.com or tweet us @CDFRunners.