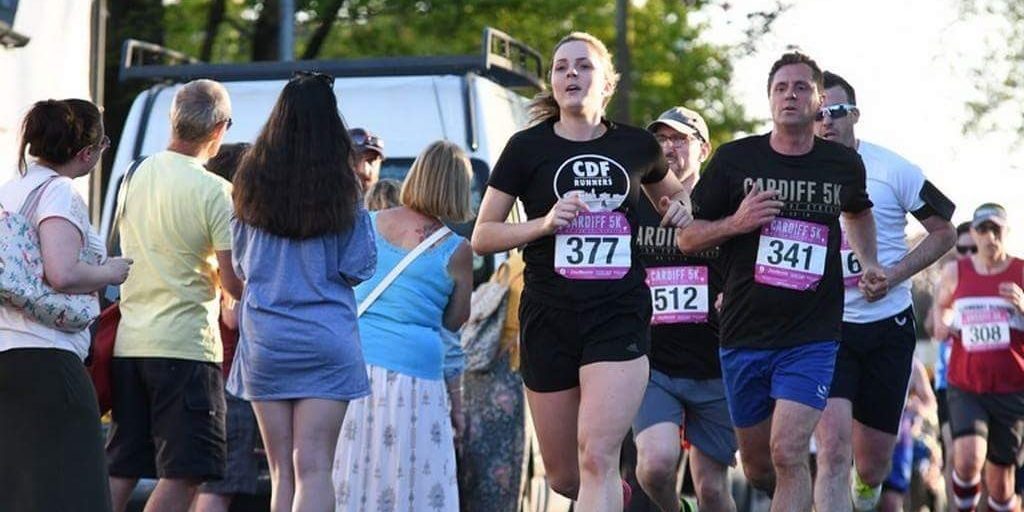 October’s Runner of the Month is Cassie, who has hit her stride very quickly and who may or may not have been asked to write this almost entirely for photos of Oscar at the end…

Growing up in Wrexham, I used to run for the local club Wrexham AAC, 1,500m was my event, I was also (once) County Cross Country champion. But, since moving to Cardiff for University, it was a rarity that I would put on a pair of running shoes.

Fast forward to two years ago and my boyfriend Ben (also a CDFer) was told running would be a good aid for recovery after his second operation to help treat sciatica. In January 2017, I began to tag along and from there, as they say, the rest is history.

My first race was the St David’s Day 10k in the March. I was completely oblivious with what to expect and ran a time of 51:40. The bug hit me then and I decided the next step was to enter the infamous Cardiff 10k (I ran 48:48) and Cardiff Half (1:52) in the October. With the half, I did what I thought was enough to get a good time in the race, but came out slightly disappointed. I didn’t have any plan with my training; I just used to run aimlessly and try to just run faster every time!

Enter CDF Runners… In January this year I tagged along to my first CDF session, which was great! Everyone made a real effort and made me feel welcome. My first race of the year was the Cardiff Bay 10k, which after around 11 weeks of training with CDF, I smashed a PB! 47:39! I have taken part in the 5k race for victory, Barry Island 10k (we won’t talk about that one, who likes hills and scorching sunshine anyway?!) and Cardiff 10k. I was over the moon to be 2nd female in the St David’s Day 10k and managed my quickest time yet, 45:41.

Everything I have done this year has been aimed towards the Cardiff Half. I’m determined to do my very best and judging from what I have achieved this year with the amazing support of CDF Wednesday and Sunday sessions, I hopefully won’t be disappointed!

I don’t particularly enjoy training on my own and I definitely wouldn’t have pushed myself as hard as I have in the CDF sessions. They are always chilled out, you can always find someone at your pace and more importantly there is always someone there to have a chat with!

Next year I am hoping to fly the nest and try a few races abroad, starting with Lisbon half marathon in March. After that, Ben and I are hoping to add a new addition to the CDF running club… our Dalmatian puppy, Oscar! I think some CDF dog merch is now vital!

CDF is now a part of my week, regardless of whether I’m training for a race or not!